How To Deal With Resentment in Your Marriage

Injured Partner: How to DECIDE to let it go

How To Deal With Resentment in Your Marriage Lesson 2 – DECIDE to give up resentment Injured Partner: How to DECIDE to let it go

What you as the Injured Partner can decide 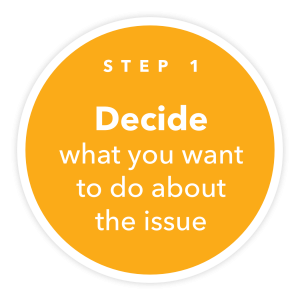 Let’s start with a very personal example of what I am talking about:

Part 1: I grew up in a home atmosphere like that.  It was a classic “patriarchal” marriage wherein my dad was “king of his castle” and my mother’s job was basically that of either serving his needs or putting her needs, desires, opinions, on the back burner. If my dad did something she didn’t like, the problem according to my dad wasn’t what he did; the problem was that there was something wrong with her for not being able to deal with it or accept it. He wasn’t physically abusive in any way, and he had many good qualities, but he was the king of dismissiveness. If he didn’t see it, or he didn’t agree with it, he didn’t have time for it. If he couldn’t deal with it, guess what – it didn’t exist.

She tried to fight back for many years, but in the end she just more or less gave up, as she withdrew more and more into herself to handle her resentment. She tried to get him to change.  She spent the better part of her life making him her “project” (AKA “a better person”), but he didn’t change that much. She resented him so much that she literally killed herself by lung cancer at age 65. When she was asked why she continued to smoke like a chimney, she replied “I’d rather die of lung cancer that have to live with your dad another 20 years”. She was the definite Injured Partner who felt she had no power to change my father.

Part 2: As a 66 year old widow, my dad handled his grief by immediately marrying a 55 year old woman who was the opposite in many ways of my mother. This new woman was aggressive with a take no prisoners personality and was domineering. She even told my dad how fast to walk, what to eat, and of course how to spend his money. He changed in many ways; He was considerate, he tried to please her, he often did what she wanted instead of what he wanted.

My dad turned from a raging tryant to a puppy dog around her. I couldn’t’ believe it.

I ask myself through the years how this abrasive shrew could have this ability to change him when my mother was almost powerless to do 10% as much, even though she spent her whole life trying. Of course there are many reasons for the difference, but one of the main ones is something called “leverage.”  The new wife had something my dad wanted – or needed – which was not to be alone in life. She made it clear what the boundaries of the relationship were – and he now complied. I thought an alien had invaded my dad’s body.

The lesson here is that the injured partner can decide that enough is enough. If you hold resentment toward your partner, give yourself permission to express your discontent and clearly indicate that you are not going to accept what is going on forever. That is, DECIDE that things are going to be different and develop a plan to make that happen.

Reflect on the idea that if your partner doesn’t change, you may be part of the reason. Adapt the mental attitude that you may not be the cause of his or her behavior, but you may be part of the “dynamic” between you that contributes to keeping it going. Sometimes ultimatums are justified in a marriage; you as the Injured Partner have a right to take the position that if your partner decides to continue what he or she is doing, you have a right to decide that that is no longer acceptable to you. They make their choice; you can not control them. But you can be clear as to what the consequences will be if they continue the offensive behavior.

Previous Topic
Back to Lesson
Next Topic
Login
Accessing this course requires a login. Please enter your credentials below!
Lost Your Password?